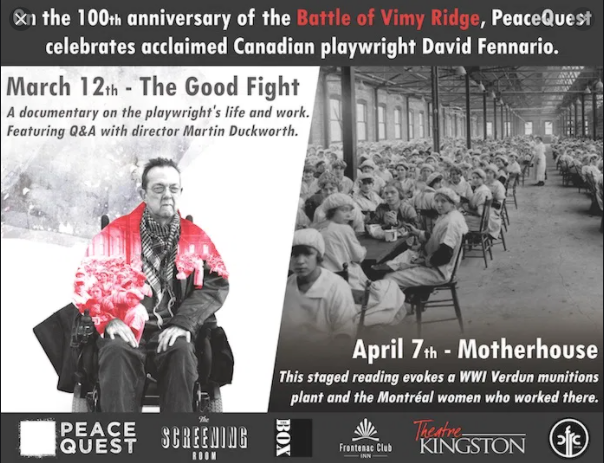 PeaceQuest Kingston and Theatre Kingston commemorate the Vimy Ridge battle by holding a staged reading of David Fennario’s Motherhouse, on Thursday, April 7 at 7:30 pm at The BOX Theatre, 237 Wellington Street.

Fennario, an Anglophone Quebecer known for his feistiness and his strong political messages. His plays help people find and document their voices, their solidarity and their passion for struggle. He does not shy away from tough topics.

Fennario says of World War I: “…of the First World War, we come across films, novels and plays that condole or celebrate that war as something honourable, rather than critique and condemn it as one of the worst crimes ever committed against humanity.”

Motherhouse gives us picture of the war that is rarely portrayed on film and television, or in the media. It is the story of women working at the British Munitions Factory in Verdun.

April 9th is centenary of the battle of Vimy Ridge. In the days to come we will be inundated with conventionally patriotic, birth-of-a-nation versions of the Vimy story. Fennario’s plays offer a different narrative.

“Theatre Kingston was happy to answer a call from Fennario and others last summer to mark the centenary of the Vimy Ridge battle by reading one of David’s most powerful plays. We join others in Montreal, Toronto and Ottawa in this project” said Kathryn Mackay.

“PeaceQuest has been organizing events since 2014 that mark the centenary of World War I by emphasizing peace – a value that we believe Canadians cherish”, said Michael Cooke, PeaceQuest co-chair.