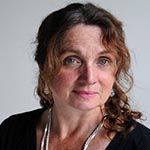 Judith Thompson is a playwright, director, actor and professor of theatre at University of Guelph. She has 16 published plays and has written two feature films and many radio dramas. She has twice won the Governor General’s award for drama, as well Doras, the Walter Carsen Award, and the Amnesty International Award for Freedom of Expression. She is the artistic director of the RARE Theatre Company which has produced Sick, Rare, and most recently, Borne.